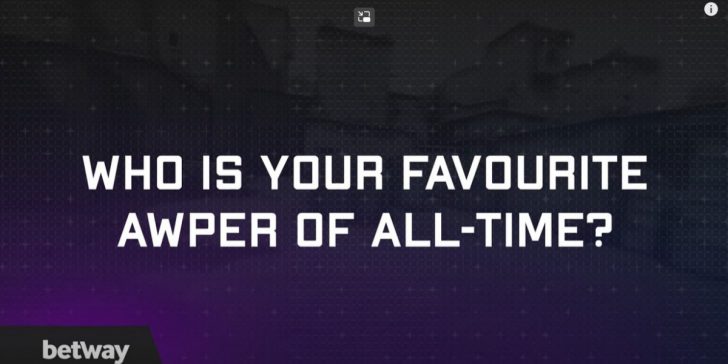 Lining up several CS:GO professional players, betway esports raised the question of which one is their all-time favourite AWPer.

As it turned out, opinions seem to be split, with the answers varying across the board.

Player SHOX from Team Liquid for example pointed at kennyS as being his AWP idol, with the esports athlete saying: “The gameplay he had was just insane, it was hard to control and really beautiful to watch.”

Ninjas in Pyjamas pro CS:GO player ES3TAG highlighted Dev1ce as his favourite, saying: “I always looked up to him. He’s a very smart player.”

The spotlight then moved to kennyS, who shared a story about himself and the AWPer he idolises the most – retired player markeloff: “First time I played against him I was scared, and I asked a teammate to play against him because of that. He’s actually the only player I ever played against that impressed me.”

Another Ninjas in Pyjamas player, Threat, actually gave the interviewee a player for each CS:GO and its older version CS 1.6, also mentioning markeloff as being one of his all-time favourites.

He said: “For 1.6 it’s markeloff. Too bad he couldn’t make that proper transition into CS:GO. And actually, in CS:GO, it’s such a boring answer but I have to say simple. He’s so skilled, it’s just amazing.”