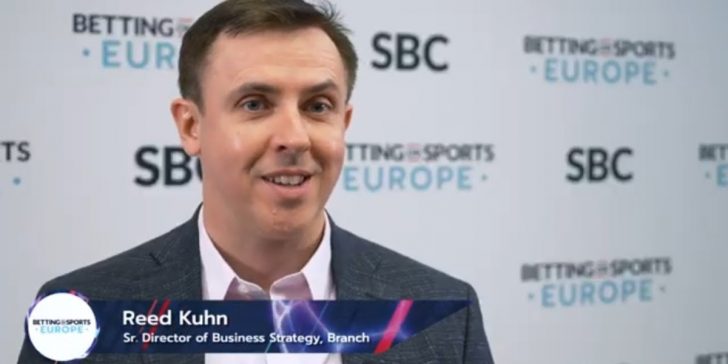 Kuhn’s first time at BOSE saw him attend a ‘Future of betting’ panel which raised some interesting talking points on how apps will transcend the betting user experience, as Kuhn detailed a lot of ‘crazy ideas’ were batted around..

Specialising in mobile deep linking and transferring users into native apps, Branch has expanded its reach into the European market and when quizzed by SBC why the Silicon Valley-based company is venturing into Europe, Kuhn highlighted the market as a ‘greenfield space’.

Kuhn stated: “We are traditionally working with the big tech giants; Amazon, Uber, Twitter, Spotify, those are very big platforms with massive amounts of traffic, just getting one thing perfect means a lot.

“From what we learned, we realised those same tricks could be applied to sports betting apps, so we see a massive opportunity. In the US, we skipped over the retail process by going directly into native apps, most users are using a native app but that’s not the case in Europe.

“We see an opportunity to take people from mobile web into an app which is going to be a completely different arrangement because the app is the digital interface between your business and the end user. We want to help bring people onto the right platform.”

Kuhn also engaged in some of the differences and similarities the US and European betting landscapes have, as the Branch figure recognises the rapid acceleration and adoption the US has taken to online betting.

“(In the US) It was really tech platforms that came in so the industry right now is app-first. They’ve leapfrogged the traditional physical retail to web, so that’s what the biggest difference is,” remarked Kuhn.

“We just went from 5 billion to 50 billion in one year… that’s a lot. We’re probably going to eclipse 100 billion and handle this year, so the growth there is creating that competitive dynamic.”

Kuhn was even able to share a unique story on his start into the betting industry coming in the form of an unlikely partnership with famous 90s rapper MC Hammer.

“My history in the betting industry is… complicated. It involves a strange coincidence with MC Hammer, we founded a company together to manage UFC fighters and I was the strategic advisor. I realised it was a small enough sport, not a lot of people were doing maths, and the overlap between maths nerds and cage fighting fans is barely anything.”

Kuhn also dives into the interest of betting on the UFC and how dynamically it works, how it opposes team-centric sports betting, and his nostalgic love for martial arts.