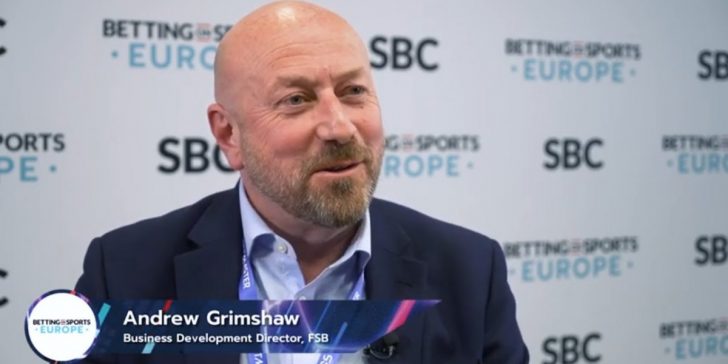 During the Betting on Sports Europe event last month, SBC’s Jessie Sale spoke with Business Development Manager of FSB, Andrew Grimshaw, on the company’s involvement at the event.

Despite recognising his short stint in the industry, Grimshaw spoke on the lengthy relationship between FSB and SBC, remarking that Betting on Sports Europe was an ‘essential event to attend’.

Hosting a stand at the event, Grimshaw delved into why FSB was at the event, with its CEO Dave McDowell, hosting a panel discussion on why operators should outsource their tech stack. Grimshaw also highlights the changes that have been taking place within the company.

He stated: “It’s been quite a transitional time for the business as well. We’ve moved away from a sort of UK focused white label operation over the last couple of years to a truly global business now. So I think we want to keep pushing that message to the right audience. And the audience is here.”

FSB recently acquired market access in Ontario, Canada, a region where igaming and sportsbetting has recently launched. Grimshaw opened up on how this latest expansion move gives FSB ‘credibility’, showing a great indicator of growth.

Lastly, the FSB Business Development Manager touched on the company’s plans for the upcoming FIFA World Cup in Qatar, hosted in November and December this year.

Grimshaw recognises the complications the winter dates may pose for technology companies like FSB, but he shares that the tech firm is working closely with the operators in what they need from them and cements themselves as a global company.