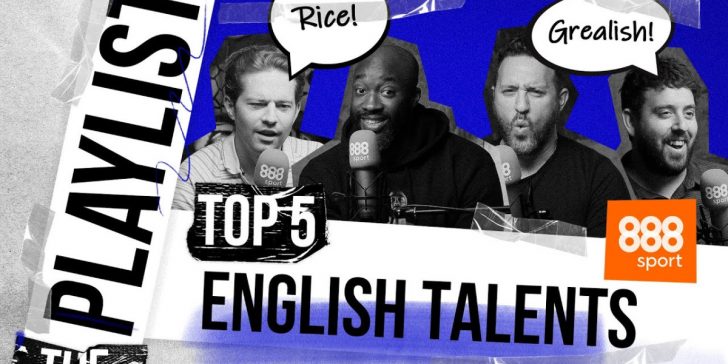 With the World Cup in Qatar fast approaching in just under two months this November, England manager Gareth Southgate will be tasked with selecting 25 of the best players he believes can give the country the best chance of winning.

Certain players, such as captain Harry Kane and defensive midfielder Declan Rice are almost as sure-fire as it gets to be on the plane to Qatar, but places within the squad in certain positions are still up for grabs.

888sports explores five English players who are vying for a spot in the England World Cup team and posing the question, “Who has the most to prove this season”, in order to secure their plane ticket.

The conversation starts with Manchester City winger Jack Grealish, who after arriving in Manchester for £100m has drawn criticism for his output, after only three goals and three assists last season.

Grealish has regularly featured in the England squad since signing for City, but the panellists question whether he will be a regular starting due to Pep Guardiola’s constant rotation of the team.

The previously mentioned Rice was also questioned whether he had the most to prove this season. Being one of few England midfielders who can perform well at the holding midfield position, Rice has become arguably West Ham’s most important player, thus, a necessity for him to be a consistently great performer for his club to succeed.

Liverpool right back Trent Alexander-Arnold has been the subject to much criticism during the early phase of the season due to his defensive deficiencies.

Notoriously not Southgate’s number one right back option for England in the past, the 888sport panel question whether Alexander-Arnold will need to improve in training on his defence like similar England right backs Kyle Walker and Reece James to have any chance of being selected.

The conversation then shifts to Marcus Rashford with most of the panel believing the Manchester United forward should have sought a move away from the club this Summer.

However, despite his form dwindling over the past season or two, Rashford has started to show signs of his previous best under new coach Erik ten Hag, with three goals in two high-profile games against Liverpool and Arsenal recently.