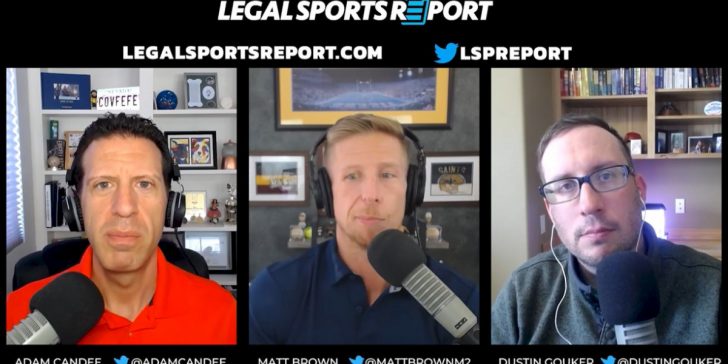 The latest episode from the Legal Sports Report show brought hosts Candee, Brown and Gouker together for a discussion on California’s online betting developments and MGM’s latest offer to LeoVegas, among other topics.

As currently there is no legal sports betting in California, the space brings excitement every time something new is announced. There is currently a fierce battle going on in the Golden State between two betting initiatives.

One is for the legalisation of online sports betting, backed by seven major US sportsbooks such as DraftKings and FanDuel. In its attempt to qualify for the ballot, the initiative has so far managed to accumulate 1.6 million signatures – significantly more than the required one million.

On the other side there is the tribal-backed initiative that has already qualified for ballot. If accepted, it would see sports betting in California limited to only retail outlets for at least five years.

If legalised, Californian sports betting will become a major artery for the industry as a whole, with Eilers & Krejcik Gaming predicting it can reach some £3bn in revenues per year.

Adam Candee said this about the situation: “The DraftKings and FanDuel-backed group announced that they have 1.6 million signatures collected. They need to have just shy of a million verified. That leaves more than enough margin for error once that petition is turned in. So, that is the version of sports betting in California that would allow for online sports betting throughout the state, mobile sports betting everywhere in the Golden State.

“We already had qualified the tribal initiative which would limit it to retail at least for the first five years at tribal-backed casinos and so, if both of those are going to be on the ballot, it sets up a really interesting situation in California, and a very expensive one as well. This could be a market that generates $3bn in revenue annually.”

Placing his political expertise into the discussion, Candee warned that the initiative might face troubles if both qualify together: “What’s going to happen here is, when two qualify for a ballot on the same issue, it gets harder for either of them to pass. People get confused, they’re not sure what to vote for.”

Another important topic of discussion was the latest from MGM and its $607mn acquisition offer towards Nordic online gambling operator LeoVegas. Interestingly, MGM is already in a joint venture with Entain. Having this in mind, the LeoVegas offer raises more questions about the MGM-Entain relationship, which in all honesty has been rocky even before that.

Dustin Gouker commented: “This looks on its face as a way for MGM to get away from that deal. It could then be powered by LeoVegas. You would presumably still see the BETMGM and LeoVegas brands. But the bigger part is whether this is the potential beginning of the end of the venture with Entain. That’s been messy, we’ve talked a lot and reported a lot about the possible acquisition attempts there.

Candee then went on to highlight that online gaming holds a level of superiority over sports betting, saying: “Keep in mind as well, that is less than half of what they offered for Entain. Obviously, it’s not as big as a name, doesn’t have the same footprint as Entain, but for MGM it could potentially represent a value. Just for everybody out there, keep in mind – sports betting is the appetiser, online gaming is the entrée.”