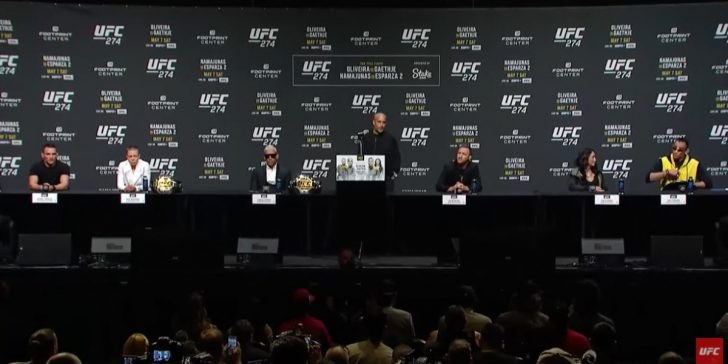 The pre-fight press conference for UFC 274 was deemed by some to be “the most respectable” in the sport’s history.

Thursday’s livestream from the Footprint Center in Phoenix, Arizona, showed a set of composed fighters who did not hide their admirations for one another. Sparks still flew however, as each one of the fighters is determined to win this Saturday.

The press conference started off with questions towards one of the participants in the main match of the night, Charles Oliveira, who currently holds the UFC Lightweight Champion title.

Asked about what he has to say to doubters deeming him as a quitter based on earlier career, Oliveira said: “Did you guys not watch my last fight? I’m chosen by God to do this, I was born in the fire and I’m not going to quit, ever.”

In a response to whether Oliveira is willing to trade blows with him at all, former Interim UFC Lightweight Champion Justin Gaethje said: “This man is the champion for a reason. We’re talking about a man with confidence, one of the best in the world. Can’t wait to take what he has, this will be my biggest accomplishment.”

Oliveira currently is on a 10-win streak, beating Dustin Poirier, Michael Chandler, and legendary Tony Ferguson in his last three fights. The latest odds paint him as a -165 to -175 ranging favourite.

Gaethje is considered the underdog, sitting firmly at +145. Being born in Arizona however, he is fighting on home territory which would be interesting to see how this plays out within the course of Saturday night.

Next in line for questioning was Tony Ferguson, who, after an audience member stated “I have a question for Tony”, Ferguson immediately said “I have an answer for it. Phoenix!”, after which he released his signature “Wooo!” that was met with ecstatic applause.

He then continued: “It’s been a year since I was inside that octagon. I can’t wait to show up for you guys on Saturday. A lot of time and effort. It’s going to be a great fight. You guys are going to be entertained.”

Answering back, his opponent Michael Chandler said: “I expect to have a little bit of a wall to go up against but I’m excited to compete. I’m excited to go out there and do it.”

Chandler stands as the solid -365 favourite of oddsmakers and the public in his fight with the ‘Master of the Imanari rolls’ Tony. A total of 83% of bets are currently on the 36-year-old fighter. He has only won against Dan Hooker in his last three fights, losing to both Gaethje and Oliveira.

‘El Cucuy’ Ferguson is in a slightly worse position, losing all his last three fights against Oliveira, Gaethje, and Beneil Dariush, in addition to being absent from the octagon for what will be nine days away from a year on Saturday. But his unpredictable nature, unique fighting style, and odds being +280 will make the fight that more interesting.

The spotlight then moved over to Rose Namajunas and Carla Esparza, with Namajunas reflecting on her difficult path to becoming the UFC Women’s Strawweight Champion.

“Talk about stumbling and falling, I’ve definitely had a few of those in my career. So, to be right here as a defending two-time champion is a testament to everything that I’ve done. It would be very poetic and I’m really grateful for this opportunity.”

A poetic fight it will be, as both Namajunas and Esparza last faced off in 2014 when the UFC had just created the strawweight division. Then 22-year-old Namajunas tapped out, with Esparza going on to become the first ever Women’s UFC Strawweight Champion. A rematch is finally happening eight years later, with both fighters significantly improving mentally and physically over the years.

Still, Namajunas remains the obvious favourite with -210 odds, with Esparza having only 16% of bets in her corner to upset Namajunas on Saturday, making her an underdog with +185 odds.