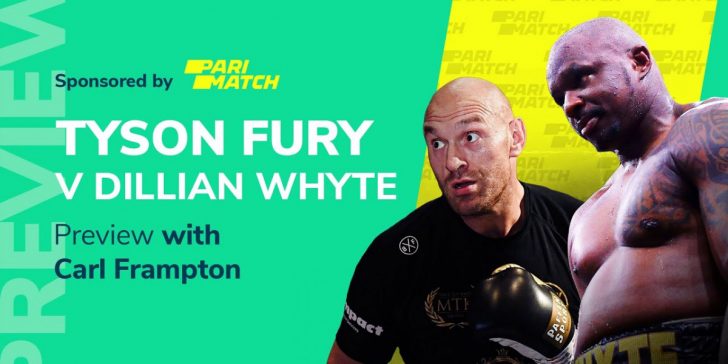 One of British boxing’s biggest fights takes centre stage this Saturday as Tyson Fury defends his WBC and Ring Magazine titles against Dillian Whyte in front of a record crowd at Wembley Stadium.

Fury opens up as a significant favourite over Whyte, with the champion priced at 1-6 with most bookmakers to retain his titles..Fury is coming off the back of an enthralling victory over former world champion Deontay Wilder last October, knocking out Wilder in the 11th round.

Whyte has been on an impressive run of his own however, winning 12 out of his last 13 fights, avenging a knockout loss to Alexander Povetkin by stopping the Russian heavyweight in round four in March 2021.

Oddschecker brought former two-weight world champion Carl Frampton to preview the blockbuster fight along with Oddschecker tipster Peter Morris. Host George Elek quizzed Frampton on who he believed was winning the fight and from the moment the fight was announced, Frampton only had one winner in mind.

“Once the fight was made I had a winner in my head… it’s always been Tyson Fury,” stated Frampton.

“If you’re going to build a fighter that Tyson Fury looks good against, you build someone similar to Dillian Whyte. But Whyte is always in it because he’s got that dangerous left hook.”

Similarities have been thrown out between Whyte and Wilder due to their aggressive punching output and huge knockout power. But Frampton downplays the comparisons, calling it “disrespectful” to Whyte.

Frampton commented: “Wilder isn’t that good. He’s a monstrous puncher but he wasn’t a very good boxer. Whyte can punch. Not as hard as Wilder but he’s a bit more about him in terms of boxing IQ. To call him (Whyte) a bit of a ‘Wilder-lite’ is a fair bit disrespectful.”

When the Northern Irish former world champion was asked by Elek what are the keys to victory for Whyte to cause the upset, Frampton believes that Whyte must goad Fury into a firefight, relying on his punching power to counter Fury’s allusive style.

“I think it needs to be a shootout. If Fury gets up on his toes it makes it really difficult for Whyte. When he throws his left hook Whyte, he kind of catches it and then he throws it. I think maybe if he starts to throw with Fury, he may have a little bit of success with that. He has to drag him into their fight.”

Fury’s style has changed recently since linking up with trainer Sugar Hill. Fury was a lot more aggressive than accustomed to in the second and third fight with Wilder, opting to go toe-to-toe with blows with the American heavyweight, instead of fighting on the backfoot and relying on his evasive body movement.

“I think the relationship with Sugar Hill is perfect in many ways because they compliment each other in and out of the ring,” added Morris.

“The difference is we’re used to seeing Fury fighting on the back foot as he moves. But now, he’s planting his feet, he’s landing the one, two, three punch combinations, I think that was one of Wilder’s biggest mistakes, allowing Fury to plant his feet and throw his punches hard.”

Fury has stated he plans to retire after Saturday’s fight, wanting to live a more low-key life back in his residence in Morecambe. Whether Fury’s statement is true remains to be seen, as he could be enticed to fight the winner of the impending Oleksandr Usyk and Anthony Joshua rematch, as every heavyweight world title would be on the line if Fury were to face the winner of that fight.