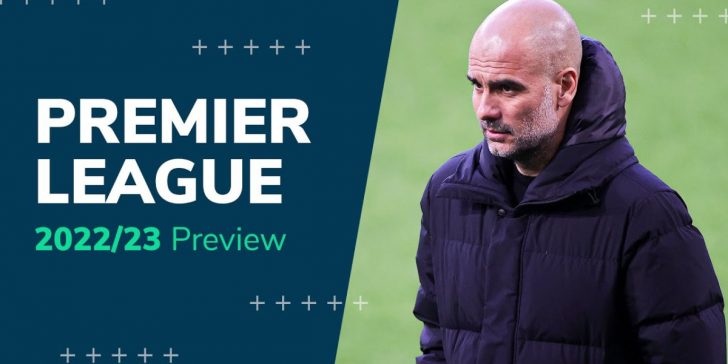 Another Premier League season is upon us as Crystal Palace host Arsenal this Friday in the 2022/23 curtain raiser.

Oddschecker’s George Elek is joined by Mark O’Haire, Jack Wright and David Preece to discuss the upcoming season giving their takes on how the league table will pan out come May whilst offering odds and tips along the way.

Starting at the top of the table, Manchester City are looking to become the first team since Manchester United in 2009 to win three consecutive titles in a row. Currently priced at 8/11, the champions are the comfortable favourites with the bookies.

But City’s closest rivals, Liverpool, have been the team to challenge Pep Guardiola’s men over the past several seasons, losing out on the league crown on the final day of the season being separated by just one point.

Liverpool are 11/4 to usurp City at the top of the league and Preece was asked by Elek if there were any good prices outside the top two teams worth consideration. Preece claims City and Liverpool ‘are so far ahead of everybody else’ that it seems unlikely, but does highlight Tottenham Hotspur as an unfancied dark horse after he believes Spurs have done ‘the best business in the window’ so far.

Despite Spurs’ applauded window and form since Antonio Conte arrived, the bookmakers have Chelsea near equals in odds to finish 3rd, albeit with question marks surrounding the transfer policy of new Todd Boehly.

Arsenal will also be hoping to make a jump from their 5th place finish last season to battle it out with Spurs and Chelsea for 3rd/4th. The Gunners have made smart signings in the form of Gabriel Jesus and Oleksandr Zinchenko from Man City with many believing they have improved their squad from last season.

The Oddschecker panel also discussed the battle to stay in the division, as the three promoted sides Nottingham Forest, Fulham and Bournemouth are the favourites for the drop. But after narrowly surviving last season and an unglamorous transfer window, Everton are closely followed behind the promoted teams as manager Frank Lampard becomes the early favourite to be sacked first this season.

The panel also discussed odds and favourites for the golden boot award, with ever-present names like Mohamed Salah and Harry Kane were mentioned, new star strikers entering the league; Erling Haaland and Darwin Nunez will also be looking to make a mark on the league with a bunch of goals themselves.