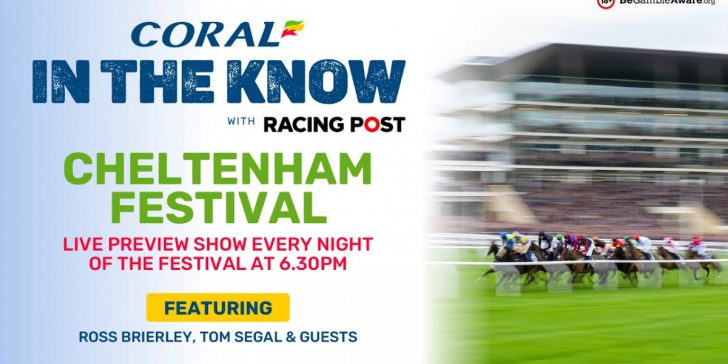 More than 68,000 fans packed out Cheltenham racecourse to witness Honeysuckle extend her unbeaten run to 15 by winning her second Champion Hurdle in succession.

There were no surprises who won the Supreme Novices Hurdle or the Arkle Challenge either, as Constitution Hill and Edwardstone won their races respectively.

The Racing Post provides a preview of day two at Cheltenham, as host Ross Brierley is joined by Coral’s David Stevens and Racing Post tipsters Tom Segal and Graeme Rodway to share their tips and opinions on day two.

“He’s got a massive chance of winning, what’s going to beat him?”

“Delta Work is clearly a very good horse winning five grade one chases. If he took to it and loved it then yes he’s got the class to give him a race. The only thing he’s never run over is the bank’s fence, so we don’t know what we’re gonna get with him.”

The star horses don’t stop at Tiger Roll however, as Shishkin is riding in the 15:30 Champion Chase, a race he is yet to lose.

Despite Shishkin’s pedigree, Energumene and Chacun Pour Soi pose a real threat to the Nicky Henderson trained horse, as Rodway outlines: “You’ve got three top class horses in it. I think Shishkin will win. Energumene threw everything he had at him and still couldn’t beat him at Ascot.”

Stevens also reiterated Rodway’s sentiment on the confidence they have in Shishkin.

“I think Shishkin, whatever the Irish horse is trying to do, I think Nico de Boinville knows he’s got the horse that can ride his own race and I hope we see him win. This meeting is about the champions, the superstars and Shishkin is undoubtedly one of those.”

The panel also discussed their opinions on the Ballymore Novices Hurdle, the Coral Cup Handicap Hurdle and the rest of the races for day two at Cheltenham racecourse.